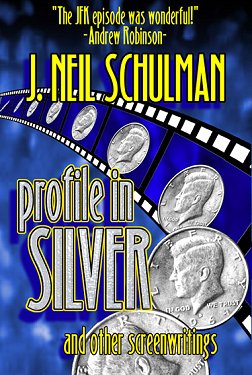 Profile in Silver and Other Screenwritings
J. Neil Schulman

After the publication of his Prometheus-Award-winning science fiction novel, The Rainbow Cadenza in 1983, J. Neil Schulman published no new books until 1994. What became of this promising author's career in the missing decade?

What happened was the sale of a film treatment to a major movie production company in late 1983 and the broadcast of Schulman's original script, 'Profile in Silver,' on CBS's revived Twilight Zone series at 8:00 PM EST, March 7, 1986.

For most of the 80's and early 90's, J. Neil Schulman was writing screenplays and stories, including other scripts for The Twilight Zone.

You never saw the movie Schulman wrote about the divorce proceedings of the Prince and Princess of Wales, written when the tabloids were still portraying their marriage as a fairy tale come true.

You never got to see the musical screenplay J. Neil Schulman wrote, where a rock band invades a symphony orchestra, or his screen story about the discovery of ancient artifacts on Mars, or his story about a cross-dimensional time-traveler we first meet at 16 when he's seduced by an older supermodel at the 1976 World Science Fiction Convention, or the unsold spec script he co-wrote for Star Trek: The Next Generation, in which the Enterprise causes an ecological disaster on a planet for endangered species...and the Ferengi save the day.

Now you can use your imagination to see all these stories in your own private screening room, and learn the stories behind the stories as Schulman tells about his adventures in movieland.

For devotees of TV, movies, and science fiction, this book shows that sometimes the stories that aren't on the screen are as compelling as the ones that are.

Foreword
"But It’s in the Script!"

The first is to write, sell and see produced one of the very best episodes of the revived Twilight Zone, perhaps the best episode.

The second is not to have a career in television afterward.

Mutual friends often ask me how this is possible. I’ve never had a good answer.

This book proves one thing. It ain’t about the scripts.

Hollywood is the most dishonest criminal enterprise in the world. Everybody knows it. Think about the humor of it. How many times have you seen movies where the hero walks away from money at the end?

Remember when Dustin Hoffman doesn’t bend over to pick up a single diamond at the end of Marathon Man? Olivier, the Nazi dentist, is dead and his ill gotten diamonds are all over the place. Dustin could pay for many things with that money: a nice funeral for his brother, publish the book he is writing to vindicate his father, even pay for his own dental bills. But in a Hollywood movie the hero is honored for walking away from money.

Or consider the maniac heroine of Titanic, who sits on a jewel for years that could be used to help shipwreck victims or do some other kind of charity work, and then drops it in the drink at the end. All Hollywood ever does is moan and groan about how not enough is done to help the poor, but let a character in a movie choose between charity and walking away from money and she’ll walk away from the money to prove she’s got heart. The point is that the real Hollywood wouldn’t walk away from a penny to save its soul. Hollywood would sell its grandmothers to the Arabs for a three-picture deal. Hollywood has yet to rise to the level of being venal.

There is only one good thing about all this. Where there are no artistic standards, there is no bias against quality any more than there is a bias against crap. Something good has as much chance of being made as something bad, because the decisions are based on anything but the quality of the script.

If there were justice in this town, J. Neil Schulman would not have been allowed to stop doing scripts for television after "Profile in Silver." They would have hunted him down and forced him to write against his will. His second script for Zone was not produced on that show but would have been just fine on another program of similar quality for network or cable.

But where was that series?

The Star Trek script Neil did with his wife for Next Generation was finished after "Profile in Silver" had been on the air to rave reviews. But this is Hollywood. They weren’t even allowed to come into the Trek production offices to pitch ideas.

The irony here is that the Schulman & O’Neal script did the first example of Ferengi as positive capitalists instead of rotten money lenders. So naturally Neil and his wife received the typical Hollywood reward. They were completely ignored.

Much later the idea of good Ferengi showed up on Deep Space Nine.

Then there’s the movie script about the British Royal family. Neil predicted the future on that one. So naturally it couldn’t be allowed at the time. And when it all comes true, it’s no longer relevant. Except that someone better placed in Hollywood, politically, could have made the movie before, during and after the divorce that barely shook the world.

The greatest crime of all is in what happened to No Strings Attached. Anyone who can read Neil’s history of this script, and not doubt the honesty of Hollywood, is qualified for a successful career in Hollywood.

The stores are full of books on how to write scripts. None of these books tell you how to sell scripts. There’s a damned good reason for that, as this book demonstrates.

But if you want to see samples of first-rate screenwriting, you’ll find it in this book. And if you hadn’t been told which of these scripts got on the air, you’d never be able to figure it out. Because they all were more than good enough to be produced.

At least Neil got to pick up the money.

Praise for
PROFILE IN SILVER
and other Screenwritings

"If you loved The Twilight Zone, you will love this book. But - fair warning - this book may make you hate The Twilight Zone for not having filmed all of these stories and screenplays (most of which author J. Neil Schulman wrote for that series). One - the title-story - eventually made it to production; others got accepted and then ended up suddenly pulled as insufficiently "politically correct." So mourn what you have missed - but enjoy what you have. Fans of time-travel paradox will especially enjoy Schulman's "Figure 8," which provides the neatest, strangest, hardest-to-guess-in-advance temporal puzzle-piece since Heinlein's "All You Zombies." No - I take that back - "Figure 8" actually BEATS "All You Zombies" on every count: and I'd never have thought that an inveterate Heinlein-addict like me could say so."
--Kate Gladstone, "The Handwriting Repairwoman"

Read a sample of this book.